It’s always a little surprising to me when I am traveling and people come up to ask me questions or directions. Have they mistaken me for a local? Do they think I look like I know a lot? I ask these questions because I almost always do not have answers for them. I have never been very good at giving directions, especially in a place that I am not familiar. Below are some of the questions I have been asked during my travels.

“Do you know where the closest McDonald’s is?” –Lisbon

“Do you know where I can exchange South African currency?” -Marquis of Pombal Square, Lisbon

Two people on bicycles rode up to me and asked me a question. In English, Italian, and Spanish I replied that I did not speak the language. They understood none of these replies and continued to circle around me on their bikes asking questions. I had to shrug my shoulders and shake my head to imply that I did not understand and continued walking. -Rome

“Do you speak English or German?” “English.” “Do you know where such and such is?” “No, sorry I’m not from here.” They replied with disappointed looks on their faces. -Outside of El Corte Ingles, Lisbon

At trolley stop, a man asked me some question about the trolley, but I didn’t understand because he was speaking in another language. I replied in English, Portuguese, and then Spanish that I did not speak the language. This didn’t have any effect on him and his expression remained unchanged. He continued to ask, but I still didn’t understand and had to just shrug my shoulders. -Lisbon

In the middle of a brisk walk down a crowded street, a woman picked me out to ask a question in another language. I replied with the typical, “I don’t speak ____” in three languages. She understood, we both laughed, then smiled at each other and continued on our way. -Lisbon

Two young men approached me on the way up the steps and asked me a question in language I did not understand. I had become tired of using the reply that I didn’t speak the language, so instead I just shook my head and said, “No.” He replied, “No? No?” with a puzzled look on his face. I said “No” again with an apologetic look on my face and continued up the steps. I realized after looking down at them a little while later that they were probably just asking me to take their picture. -Spanish Steps, Rome 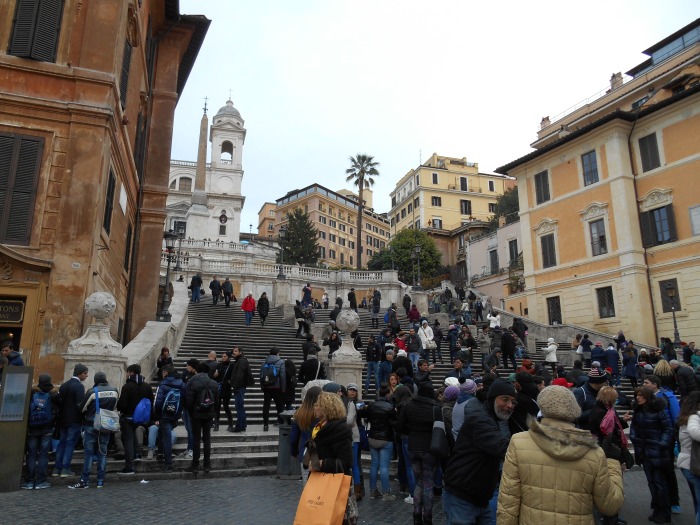 At a Metro stop, a man asked me if the upcoming train was to a certain location. I smiled because I actually knew the answer. “Yes, it is.” I had only been using the Metro for one day. –Washington, D.C.

Published by Tripping and Trekking

I am a woman who is beyond the age of college but not yet middle aged. I am a person who is ready to see the world around me. I went on my first solo trip abroad to Rome and Portugal. I still have many, many countries I want to see and I hope to get there someday. Traveling alone opens a whole new world and I want to explore this world further. There are so many wonderful things to see! View all posts by Tripping and Trekking

One thought on ““Do you know where…?” and Other Questions I Am Asked When I Travel”